Germans love sports, so it is no surprise that they are also enthusiastic about games. They have a lot of fun with card games, board games, and children’s games. And through the years, the country has also grown fond of video games. The German game industry topped the European game markets in 2020.

In June 2020, Germany ranked as the region’s most valuable video game market at 5.97 billion U.S. dollars. Now, it is one of the largest in Europe and the fifth-biggest market for video games in the world. This is an impressive feat considering that the German gaming industry only started to emerge in the early 2000s.

With such a large and growing market, it is no wonder that more and more companies are looking for localization services to enter the German gaming industry. Game localization is key to success in any foreign market, and this is especially true for Germany.

Skat, a traditional German card game that originated back in the early 19th century,  was and still is a popular game in the country. From here, it is unsurprising that German companies were some of the first to develop and release video games. In fact, their game industry started with the development of “Weltmeister” in 1982.

However, it wasn’t until the early 2000s that the industry started to take off. One of the main reasons for this is that the internet has become more widely available in German households. With this came a whole new wave of video games that could be played online.

Since then, the industry has been on an upwards trend and it doesn’t seem to be slowing down anytime soon. In 2021, the German game market saw approximately 9.8 billion euros in revenues. It grew by 17% from 2020, and it is expected to keep growing in the years to come.

Germany had 34.3 computer game players in 2020. By 2021, 50% of Germans played computer and video games, with 16% of video gamers aged 10 to 19 years. About 403 video game companies in Germany publish and develop games, giving the world iconic German-made video games like Anno 1800 and This War of Mine. 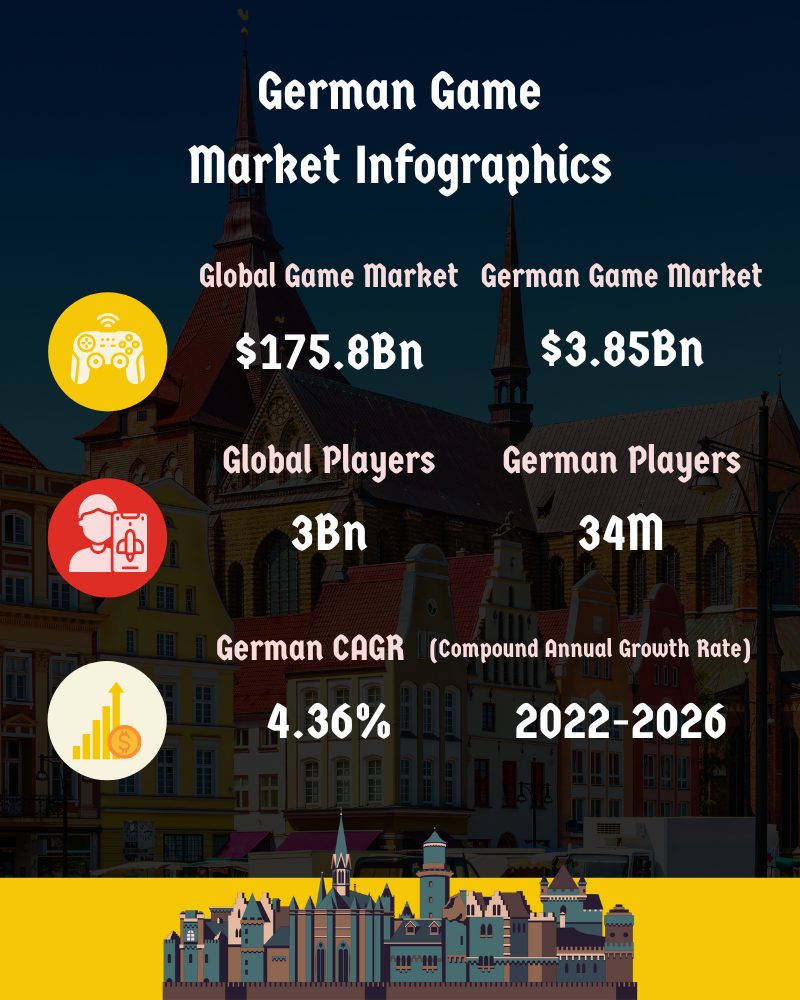 Yes, Germany is one of your top choices if you are aiming to enter the European gaming market. But as with any other foreign market, success is not guaranteed without proper game localization. If you want to sell your games in Germany, you need localization. The German market is very different from others, and your chances of success are slim without localization.

German gamers are not only different in terms of the games they play but also in the way they consume them. The State of Online Gaming 2019 research reported that German players spend more time playing than gamers in other countries. They play for nearly eight hours per week.

Moreover, according to a 2021 survey, 76% of German gamers had spent money on games in the last 12 months. The German Games Industry Association also reported that German consumer game spending reached 11 billion U.S. dollars in 2021. This is where localization comes into play. If you want to maximize your chances of success in the German market, your games need to be localized.

Note: German gamers, like other international gamers, are very discerning and will not hesitate to move on to the next game if they don’t find yours enjoyable.

When you localize a game, you have to include even the smallest details. It does not start and end after you localize a game title into German. You must know the game and its story, the characters, and everything in between. You also have to consider the gaming culture in Germany.

Working with a game localization company will make it easier for you to incorporate the German gaming market and culture into your project. Game localization is best done by professionals.

What are German gamers playing these days? Which genres are popular? What do German gamers look for in a game? These are just some of the questions you need to answer before starting the localization process.

Moreover, you have to consider German video games censorship. Among the world’s video game consumers, the country is one of the strictest censors of violence. Crucial knowledge like this is essential to the success of your German localization project.

Game localization in Germany can be challenging, especially when you do not know the language. Localization, in general, already requires a lot of work. And when you add German into the mix, things can get even more complicated.

Partnering with a game localization company that knows both German and the German gaming market is essential. With their help, your game will have a better chance of succeeding in the country. With proper localization, you can ensure that your games are tailored specifically for the German market and stand out from the rest.

Benefits of Developing Games in Germany

Being a game developer in Germany has its perks. The country is home to some of the biggest gaming conventions in the world, such as the Gamescom convention, which takes place in Cologne every year. There is no denying that the country has a vibrant game development scene!

The top gaming companies in Germany include Bigpoint, Goodgame Studios, InnoGames, and Gameforge. It would be best if you considered developing your games in Germany for many other reasons. If you are still not convinced, here are a few more: