Covid-19’s impact on the gaming industry

COVID-19 has had a significant impact on every business in the globe, including gaming. As the world hunkered down, gaming exploded as people sought ways to pass the time while the physical movement was restricted.

Despite the fact that gaming consumption has increased, we wanted to look at the statistics to see what trends are driving the gaming industry’s success during the worldwide pandemic and economic slowdown. This feature article will delve into the details. We’ll look at the game genres players are gravitating toward, how they behave in these games, and how games have shown to be reliable revenue generators during a worldwide economic downturn.

The data and analysis from this article are based on Unity’s report on the video game industry during COVID-19 pandemic.

Let’s talk about Unity for a moment. The Unity gaming engine is the company’s most well-known product. It powers 53% of the top mobile games on the market, as well as PC consoles and mixed reality experiences. Unity has developed a comprehensive framework that allows you to not only create but also run and monetize your games. They’ve also acquired Delta DNA, a company that delivers sophisticated player interaction and game-making tools.

Anyone who’s tried to run a live service game before knows that’s not a one-man job, and producing these kinds of gaming industry insights is no different. Unity has worked with some of the most established networks and gaming developers in the business. They understand gaming monetization, and most importantly, how the two of them work together. If you’d like to learn more, you can find out more through their website.

Since this article covers all kinds of gaming. We’ve split them into two, distinct groups. HD gaming refers to PC, Mac, OS, and other desktop platforms, with Graphics, typically rendered in high definition. The second one is, as you may already know, mobile gaming, which refers to gaming in IOS, Android, and other smartphone devices. Before we dive into the takeaways, I want to talk about how to read the charts.

Looking at the charts

Unity and gaming. In general, they have grown a lot year by year, which means that it’s hard to compare the raw values of each year. The chart on the left shows what the raw data might look like. As you can see, 2020 has seen a slight increase, but it is hard to compare to 2019 without laying both of them next to each other to solve this issue. We’ve normalized the data from the first week of each year, which became the baseline value. This means that each subsequent data point is basically a percentage change above or below the baseline value. That means that the first week of the year would start at 0% and subsequent weeks would be plus or minus that baseline percentage number. This way, we’re able to see with more clarity the true difference they have between each year.

More people are playing video games during the pandemic

Let’s dive right into the data. Our takeaways will be about video game industry during COVID-19 and how pandemic has affected overall gaming habits. We have 4 major takeaways from this report. Our first takeaway is that more players are gaming and even compared to 2019, we saw a 17% increase in mobile gaming, daily active users, and a whopping 46% increase on the HD gaming side. Traditionally, players have to carve out a little bit more time out of their day to play HD games, but with everyone staying at home, these HD games saw the most significant bump. Mobile gamers didn’t slouch either though. 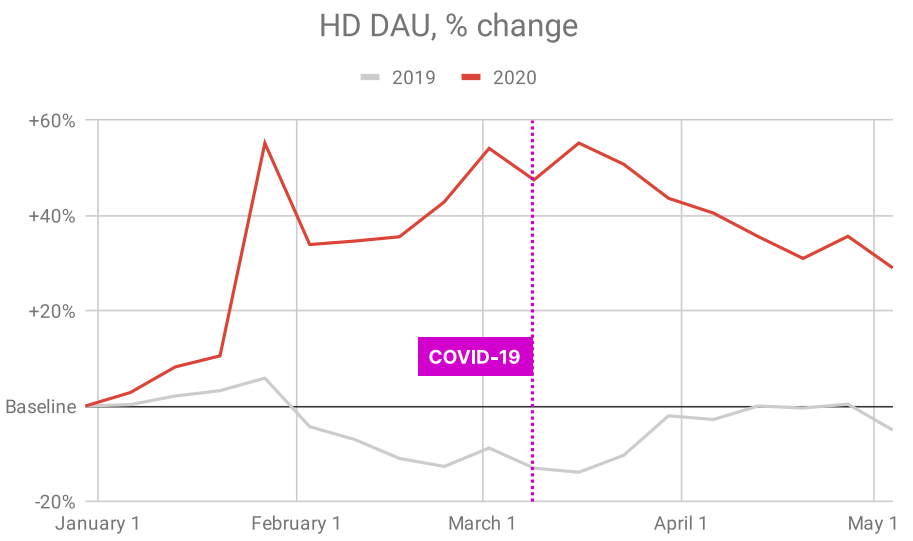 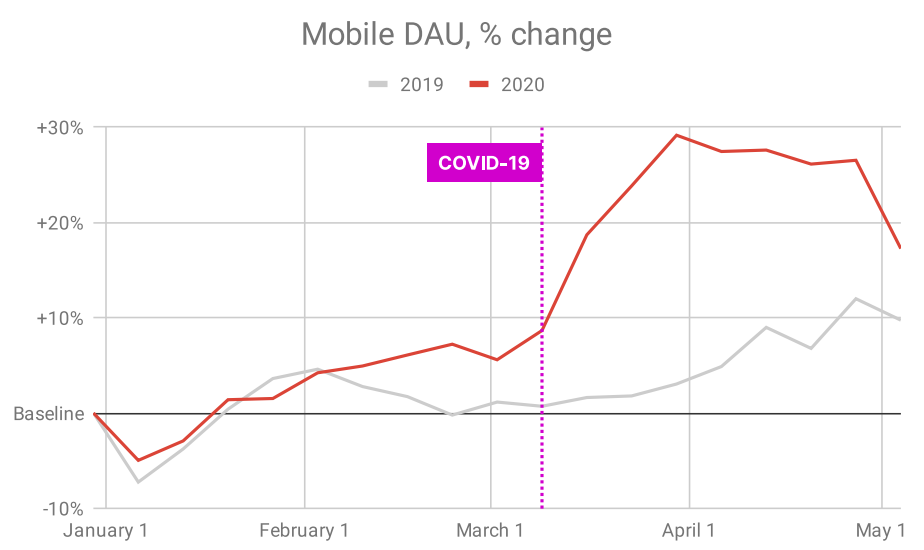 In 2020, there was already an increase above the baseline from earlier in the year. When the global pandemic was declared, there was a noticeable spike upwards.

If you notice, we picked the second week of March to draw the COVID-19 line. We picked this week since on March 11th, 2020, the World Health Organization declared COVID-19 a global pandemic. That same week also lined up with many lockdown declarations around the world. 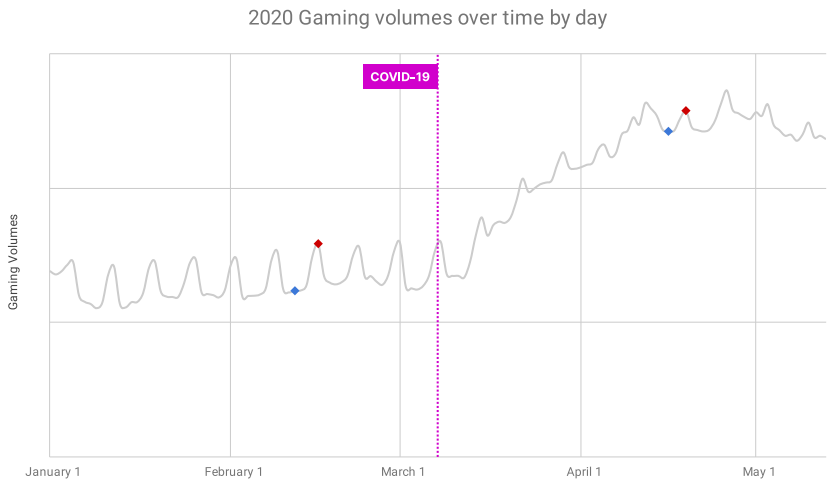 So not only are more people playing games than ever, the time that they play has also changed. Traditionally, we see gaming traffic peak on the weekends which is Friday through Sunday and dip to their lowest on Wednesday and Thursday. This can be seen on the chart above, with the weekend marked by the red point and Wednesday by the blue point.